Scattered between Sulawesi, Timor and Papua, and long known in the West as the “Spice Islands”, whose once unique cloves and nutmeg drew visitors from all over the world for centuries, the Moluccas are made up by over a thousand beautiful tropical islands with lush vegetation and unique fauna, stunning beaches and marine life, and very friendly, hospitable people. More than any other region in Indonesia, this is the ultimate destination for those who like island-hopping and scuba diving/snorkeling well off the beaten track!

The Moluccas today are divided into 2 provinces. “North Maluku” province with its majority Muslim population and its capital Ternate stretches from Halmahera and Morotai to the Sulas and Obi. The majority Christian “Maluku” province encompasses the central and southern regions of the Moluccas from Buru and Seram to Wetar, with its capital being Ambon.

Both provinces are equally beautiful and share similar history, culture and attractions.

Probably Ambon’s biggest attractions for most divers are the famous critter dives in the channel that leads to Ambon. The diving is not dissimilar to the Lembeh Strait – there may be slightly fewer critters by number, but there are as many species with everything from rhinopias to seahorses.

Other spectacular diving sites are close by. Small Nusa Tiga island has exciting wall dives and Nusa Laut has an underwater promontory that hosts enormous schools of resident jacks along with larger animals like bumphead parrotfish, eagle rays and small reef sharks. Ambon also has a great wreck dive, the Pertamina Wreck, which is covered in healthy corals.

Despite its location at the very centre of the richest and most diverse waters on earth, the largest island in the Moluccas has remarkably escaped the attention of divers clamouring to visit Indonesia’s many other diving meccas. This area is finally beginning to open up and represents a new and exciting frontier for adventurous divers.

The waters around this sparsely populated island play host to pristine, untouched reefs and an astounding biodiversity. While the waters are still relatively unchartered, a survey in 2005 suggested that Halmahera is comparable only to Raja Ampat – currently considered the most diverse habitat on earth – with at least 450 species of coral and over 800 species of fish recorded in just a few hours. 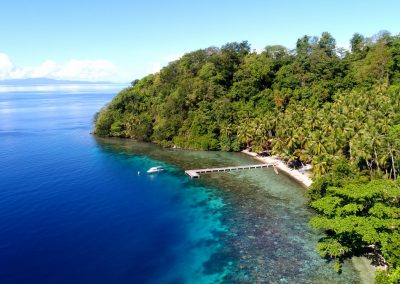