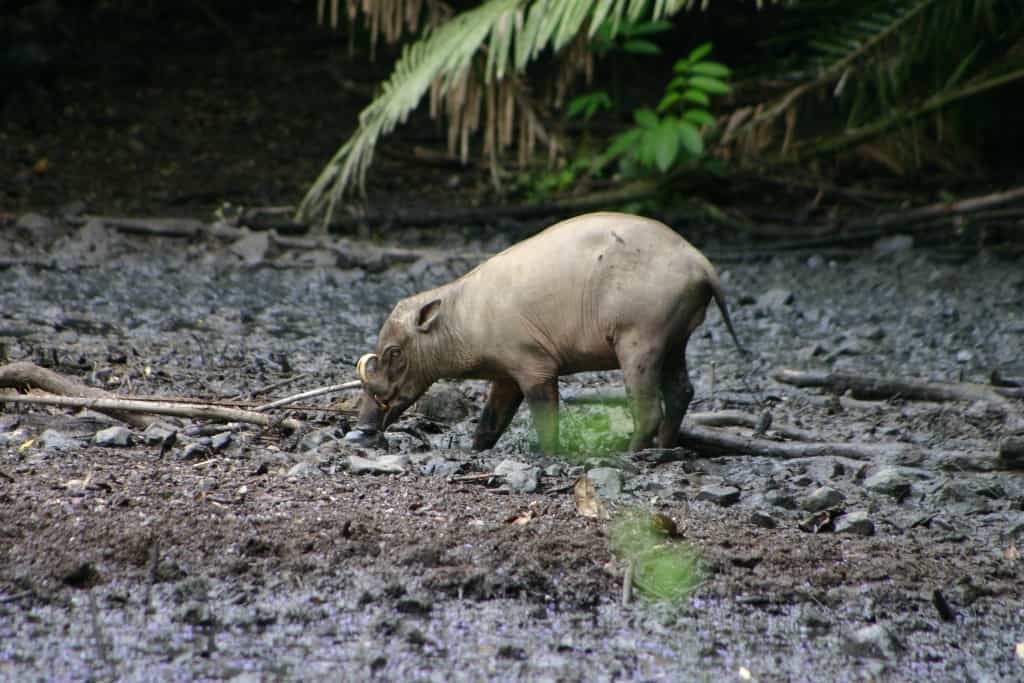 Gorontalo is located on the island of Sulawesi in eastern Indonesia and is tucked in the calm waters of the northern shoreline of the Tomini Bay, on the southern fringe of Sulawesi’s protective northern arm. Here the weather is balmy and equatorial.

The local inhabitants are from Gorontalo ethnic backgrounds with their own traditional language. Being the main gateway to the diving area of the Togean Islands, Gorontalo can be reached by a 1 hour flight from Manado or an 9 hour scenic drive. You would be surprised by what Gorontalo has to offer in its forests with its endemic fauna as well as the unique diving of the Togian Islands.

Nantu Forest is located in the heart of the Wallacea region in Gorontalo Province. Wallacea is the wildlife transition zone between Asia and Australia named after its founder, Alfred Russel Wallace (1823-1913), a famous British biologist, naturalist, and anthropologist. Nantu Forest consists of Nantu Wildlife Reserve (33,023 ha), Protected Forest (19,606 ha) and Production Forest (10,002 ha).

The forest is very important for the ecosystem benefits it provides. A community of approximately 30,000 people live within the Nantu and Paguyaman river watershed and is completely dependent on these rivers for its water supply. Nantu’s carbon content is invaluable. If the forests were cleared, up to 50 million tonnes of CO2 could be released to the atmosphere. Nantu Forest is famous because it is the only place in the world to reliably see its other endemic inhabitants: the Babyrousa celebensis. 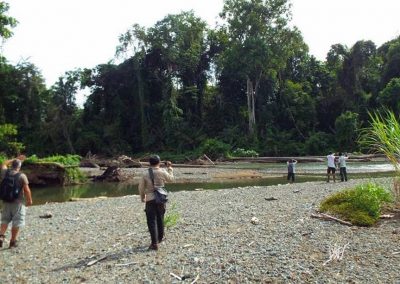 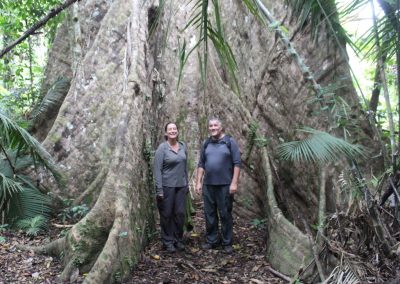 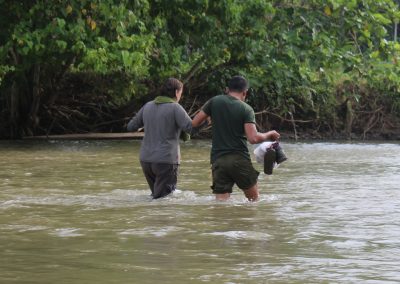 The babirusas, also called deer-pig (Indonesian: babirusa) are a genus, Babyrousa, in the swine family found in Wallacea, or specifically the Indonesian islands of Sulawesi, Togian, Sula and Buru. All members of this genus were considered part of a single species until 2002 as the babirusa (Babyrousa babyrussa), but following the split into several species, this scientific name is restricted to the Buru babirusa from Buru and Sula islands, whereas the best-known species, the North Sulawesi babirusa, is named Babyrousa celebensis. The remarkable “prehistoric” appearance of these mammals is largely due to the prominent upwards incurving canine tusks of the males, which actually pierce the flesh in the snout.

The North Sulawesi babirusa (Babyrousa celebensis) has a head-and-body length of 85–110 cm (33–43 in) and weighs up to 100 kg (220 lb). It is virtually hairless (easily revealing its greyish skin), and the tail-tuft is also nearly hairless. In males, the relatively long and thick upper canines are strongly curved. They emerge through the roof of the snout, while the long lower canines emerge through the side of the mouth. The upper canines can grow backwards in a curve until they penetrate the skull of the male babirusa.
In females, the canines are far shorter and typically do not protrude. In comparison, the Buru babirusa has relatively long, thick body hair, a well-developed tail-tuft, and relatively short and slender upper canines in males, while the Togian babirusa is larger, has a relatively well-developed tail-tuft, and the upper canines of the male are “short, slender, rotated forwards, and always converge”

The common and scientific names are various transcriptions of its local name, which literally translated means “deer-pig” (from Indonesian babi “pig” + rusa “deer” – see also Javan Rusa) in reference to the huge tusks of the male suggestive of a deer’s antlers. 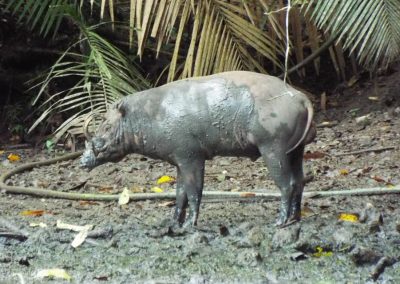 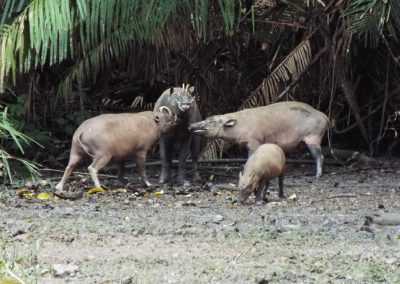 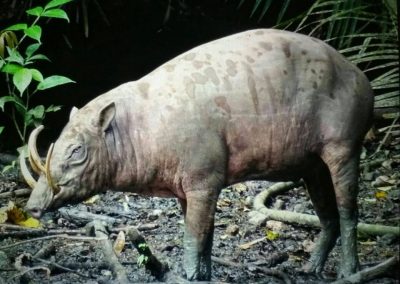 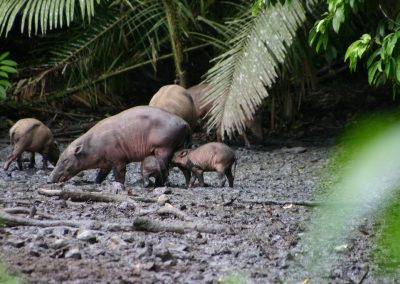 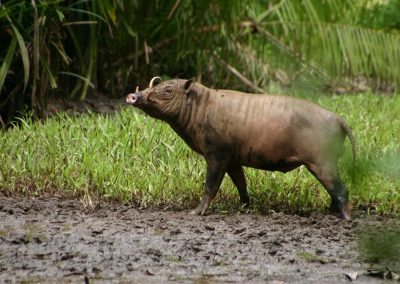 Pick up from city hotel at 08.00 and depart to Gorontalo by a private car (the trip will be approximately 9-10 hours). Along the trip you can enjoy the scenery. Lunch will be served at a restaurant on the way about halfway to Gorontalo. Check into hotel in Gorontalo and dinner at a local restaurant.

After breakfast (starts at 7 AM ) check out 8 AM and continue to Nantu (the trip will take approximately 4 hours). Lunch box will be provided or stop at a local restaurant and we will continue the trip to Nantu. Lodging will be a homestay in the village with dinner. (Option- go in for ½ day if time allows – extra charge applies)

Breakfast at the homestay. Depart 7 AM sharp, trekking to Nantu Forest (40 minute walk from homestay) to the ranger station (check-in) and then another 20 minutes to the “hide” observation point. Lunch at the camping ground/ranger station, then in the afternoon back again to the forest for another viewing. Lodging will be a homestay in the village with dinner.

Breakfast at the homestay. Depart 7 AM sharp, trekking to Nantu Forest (40 minute walk from homestay) to the ranger station (check-in) and then another 20 minutes to the “hide” observation point. Lunch at the camping ground/ranger station, then in the afternoon back again to the forest for another viewing and stay until approximately 3 PM. Trek back to homestay, shower and then drive to Gorontalo , four hours (arriving in Gorontalo around 9 PM). Dinner at a local restaurant.

After breakfast, check out and drive back to Manado (the trip will take approximately 9-10 hours). Lunch at a local restaurant. Drop to airport or next resort location. End of services.